For those of you who have been following along on the Twelve Days of Christmas saga, this is year three, which equates to Three French Hens. 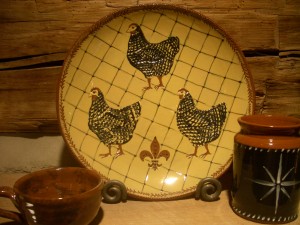 For the hens,  I had our chickens model for me, which was not easy, but eventually they settled down long enough for me to admire their feather structure.  I did take some artistic license in using our Dominiques;  they do not really come from France, but from a French colony, known today as Haiti.  But it wasn’t the actual hen I was after, as much as the technique of early redware, that being feathering, or combing.  The Dominiques have such a beautiful feather pattern that was just perfect for this technique.  Lines of wet slip are trailed out, following the body parts of the hen.  Then, the tip of a real feather, turkey in this case, was dragged through the wet slip, mimicking the feather pattern of our hens.  The raised clay gives a nice depth to the hen, and no one’s feathers really get ruffled. 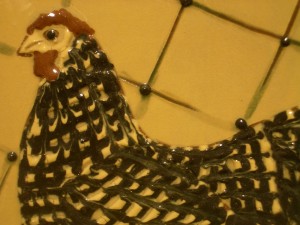 So, as we near the Christmas season, (I personally think it starts the day after Thanksgiving), we are beginning to put the song together.  I leave you with:

Two Turtle Doves, and a

Partridge in a Pear Tree.

You’ll have to go back to other posts to see what the pieces were.  Now for next year…Four Colly Birds, yes COLLY.  For that explanation, you will just have to wait for next years’ Christmas season post.  Although, if you are a Facebook user, Like my page, and you will be able to see it,  around June 2015.  This series is really beginning to take shape!  Only 9 more years!