This post is not meant to debate the two schools of thought in the title, but mainly to display how my brain works and how these two ideas worked their way in to my head, out my head, through my hands, and in to redware pottery.  Perhaps it was my upbringing, my home environment and early schooling, that shaped my opinions and beliefs, and drove me with utter passion to creating these plates. 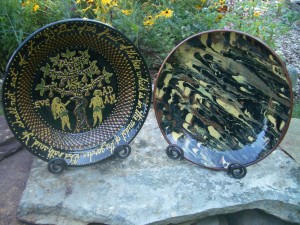 The bowl on the left, was inspired by a late 17th. c. plate by British potter Thomas Toft.   His Adam and Eve are just as folky as one gets, and they really spoke to me.  I also like the Toft technique of slip-trailing the lattice design around the piece.   Now the platter on the right is simply the technique of marbling.  I was first taken by pieces I saw by Solomon Grimm, Pennsylvania, early 19th c.    This was being done by other potters too, but I  really enjoy his work.    So, as I was looking at these two pieces, I was trying to decide if I would reveal my true feelings about this debate.

Nah.    But I will say, I’d hate to be on the wrong side when I am standing before the pearly gates.