As winter has blanketed the pottery compound with the usual quiet,  restful  ambience for which the season was designed, folks have been asking me if my hibernation period is rejuvenative? To which I reply, “Yes, it is very restful,  in a vibrant, creative way.”  Instead of lying around though, I have been ‘Lion’ around, and doggin’ around, and monkeying around! 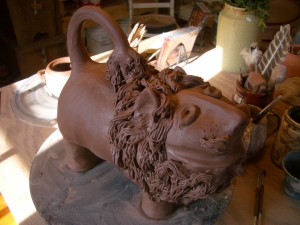 A friend of mine has challenged me to make some mid 19th century redware animal figures, which were used for paperweights and doorstops or just made for fun.  I have to admit, I was reluctant to get going; but once I did, they kind of grew on me and became not only a challenge, but a fun challenge; perfect for the winter rest.  The lion is the second of the animals and is the most challenging because of the thrown body and head.  Once those are assembled and he has his head about him, he gets other lion parts like his tail and mane, which is made by squeezing clay through a garlic press. 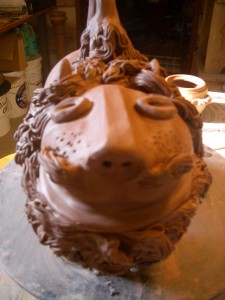 To tell you the truth, I was so happy when I opened the kiln and saw that he had survived and had not become a ‘lion bomb’. (exploding lions can be a real mess)  His beautiful smile was looking up at me saying, “all is well Tom, you should have a lie down”.   So I think I shall, keep ‘lion’ around, because it really does rejuvenate the creative spirit. 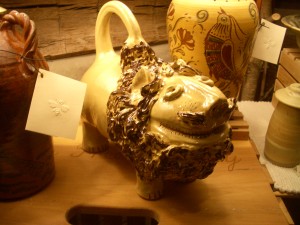 Winter will be soon be gone.

Redware lambs, dogs, and monkeys riding dogs, (sorry OZ fans, no flying monkeys) to come in future posts.  Oh, and a bear or two  too!

2 Responses to Just ‘Lion’ Around