If you don’t know me, I feel obligated to tell you I am a folk potter.  I enjoy using my hands as tools, taking clay, and throwing it into pots or molding the clay into things to stick on pots.    So you may have seen pots of mine with snakes on them.   “Oooh, yuk!”, you may say.    “Oooh, Aah”,  I say.    Don’t get me wrong; I don’t particularly like snakes, but I don’t dislike them either.  They, like all things, serve a purpose on this planet; and to me, in this part of Indiana,  it means blacksnakes around the barn and chicken house, which means less mice. (and sometimes eggs)     I also enjoy historic pottery, which brings us to why I make the snake jugs.   Symbolically, they are to remind one that the whiskey in the jug is good for medicinal purposes, but if abused, it will bite!   Good advice indeed!   Hast thou been bitten??  Well, I thought it might be fun to show the steps in bringing one of these to life.    First, one needs a freshly thrown jug that can be put aside for a few hours until it hardens up a bit. 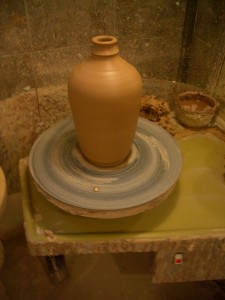 There is a timing aspect at this point because the clay on the jug has to be moist enough to apply the snake, but not too wet so when the snake is pushed on, it won’t deform the jug.    OK.   Now one needs a snake.   Oooh, yuk!  No, No , No, not a real snake.  I said I was a folk potter, not a crazy potter. 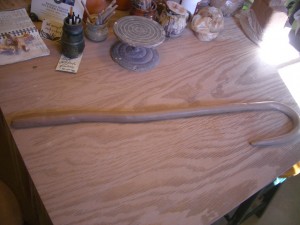 I know it doesn’t look like  a snake, well kind of; but the idea is to roll out a coil of clay in the shape of a tube.  In this case,  about five feet long.   The next thing is to start the modeling process where the head is shaped and the scales are incised one by one.  Yes, I said one by one and there are hundreds on the average snake.  (although I’ve never really counted)   For this particular jug, I want to make the head appear to go into the jug and then reappear as the pouring spout of the jug.  Pretty cool, huh!?   So, if you’re squeamish, skip down a few lines.   The snake doesn’t really go through the whole jug, it just looks like it does so I have to cut the head off…   Oooh, yuk ! 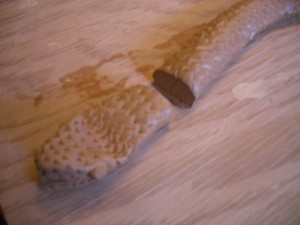 Now that we have a snake that won’t give us any problems,  I can confidently handle him, wrapping him around the jug, making a handle with his body and finishing up somewhere lower on the jug with a little bit of relief.  I can only imagine if someone was looking through the window of the studio when I was doing this, they might just rush in to save my life.  (or run away screaming like a little girl)  This is why snake handling is not for the faint of heart. 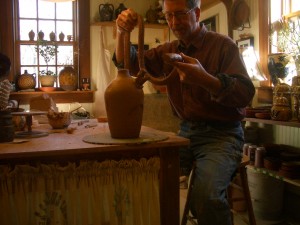 OK.  So now the snake is contained, the snake has been reattached to  it’s head.   (ok just pretend)   Then I pretty up the head by giving it fangs, which every symbolic, whiskey scaring rattlesnake should have, and color its eyes with black slip.   The snake is now ready to be a righteous snake and save you from the depths of falling into the jug.   Well, not quite, first he has to be fired at 2345 degrees and go through the depths of a fiery kiln in order to save you.  But he does,  Oooh, Yay! 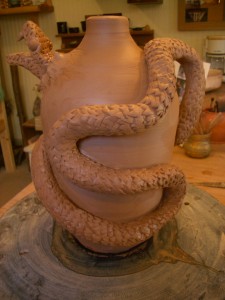 Here is the snake getting ready for his firing. 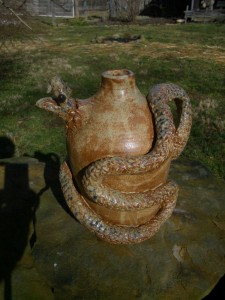 So, remember, all snakes are not bad, and all serve some purpose.  When you see the snake jugs I make, think of the good that is actually the intent and a little less of the…   Ooooh, Yuk!