Drips and drops and squiggles; Oh My!!

Not to worry!  It only adds to the authenticity of the process.  In the 18th and 19th centuries, slip trailing was one way of adding decoration to redware pottery.  Slip is just clay in water suspension; so it flows freely out of a cup like tool, shown in this image.   Because the slip needs to be liquefied enough to flow out of the cup through the turkey quill, it presents some interesting challenges. 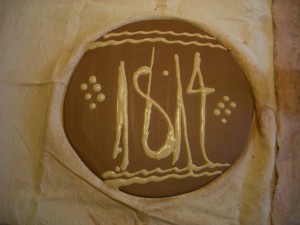 One being gravity.  The slip wants to flow to the lowest point which means the plates have to be decorated “flat out” flat.  If they were already curved, the slip would flow to the middle and you have what is known in pottery jargon as “one messed up design”.    The other challenge is clay has to be wet in order to stick to other clay.  Which if you haven’t guessed yet, means, what you write is what you get; because if you go to wipe it to fix it, you smudge it and wreck it.  (see “one messed up design”)  OK.  So, once I am ready to write using the quill, liquid clay and a flat plate, anxiety flashes and I go for it.   Thus, drips, drops and squiggles.  Now the plate has to sit; because the third challenge is getting it to slump on a mold without smearing the already thick and thin letters.   It is now a waiting game.  When the sheen leaves the lettering, I slump it on a plaster pie plate form and beat the edges down to  get the shape, trim the edge, and go to bed. 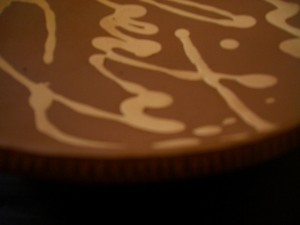 And then I remember I have to see if my lettering smeared.   So, I pop off the plate and Voila! the slip is now flat, almost, and not smeared.   The plates then sit about 7 days and air dry and are then fired to 2000 degrees;  glazed, and fired again to 2000 degrees. 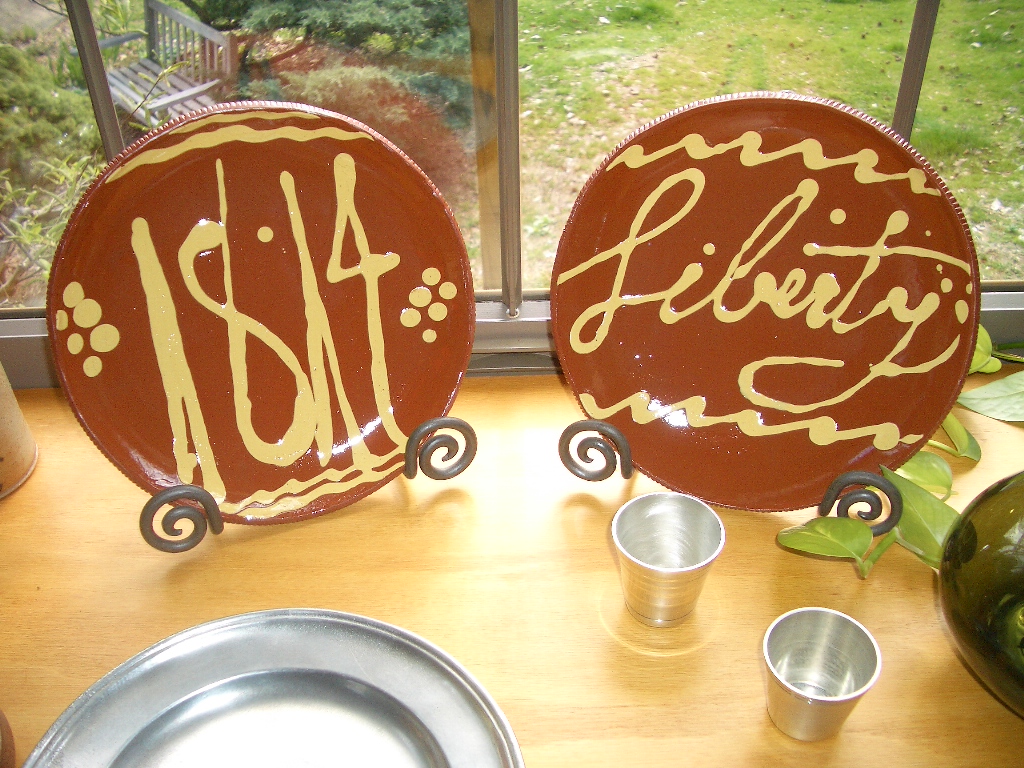 So, now we have some decoration on our redware, our gravy will stay on the plate, anxiety is gone, and life is good.   Oh my.

This entry was posted in Plates. Bookmark the permalink.