Where has the time gone?

Wow!  I realized today I had not posted anything for about three months.  For those of you who were extremely worried, I assure you I am fine; only to have been suffering from “alottodo”, with a touch of “procrastinitus”.  Nonetheless, I promised an update on the Ollas made and used this summer, during one of the worst droughts Southern Indiana, and other parts of the country, have ever suffered. So first, let me show you the pictures; I believe they speak for themselves. 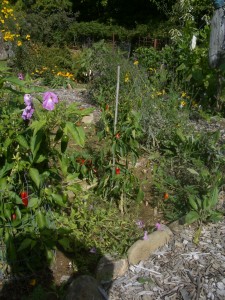 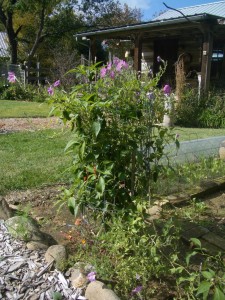 OK, let me recap.   I buried the Olla next to one of the pepper plants and did not water any other way, except through the exposed Olla spout.   The drought was brutal, leaving all plants, and animals incredibly thirsty.  The pepper plant on the right is the one with the Olla buried next to it.  It seems that the roots of this plant definitely benefitted from the water seeping into the ground.  Not only was the plant double in size, it had twice as many peppers for the yield, and the wild petunia that came up next to it was happy also.  The petunia was also competing for the moisture, yet the pepper still outperformed the “no Olla” pepper.   So, is this a conclusive thumbs up for the Olla?  I have to say, although limited in scope, the drought made this a very easy comparison to make.   No rain from above meant the only way of getting moisture was through the Olla.   I think I’ll make some more, but certainly don’t want to be testing  them through any more droughts.  My final humble opinion: