A friend of mine, let’s call her Michelle, loves owls.  And I agree.  Owls are cool birds.     First of all, they are amazing to look at.  From the smallest we have in our area, Screech Owls, to the biggest we’ve seen, some Barred Owls.   They make incredible night noises that can stop our outdoor conversation in it’s tracks.  They have incredible night vision and fly through the woods without a sound!   Amazing!

So, Michelle asked if I ever put owls on my sgraffito plates or would I?  I told her I hadn’t, but immediately thought of a plate I had seen that was made in the early 1700’s in Staffordshire England.  When I showed her a picture of the original, she said she was in.  And I agreed.    The original is so quaint; the mother owl, her six owlettes and then for some reason, a small strange bird of another species.

Who knows what was in the potters mind, but it sure gets our attention 300 years later.  The original was slip trailed, but I was asked to do an interpretation of the plate in sgraffito decoration. 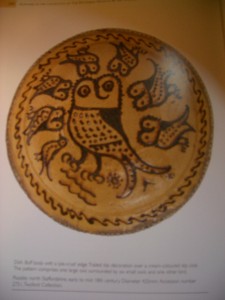 Here is my best attempt at an image of the original. 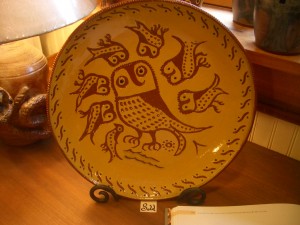 Here is the sgraffito plate that is my interpretation.  Just gotta love that odd little bird looking to be an amazing owl.

So, Michelle is actually the wise owner of the new plate.  But Whoooo is the maker of the original 300 years ago?   We will probably never know.         Just another  great British   “Whoooodunnit”.