Just got back from Arkansas firing an above ground, Groundhog wood kiln 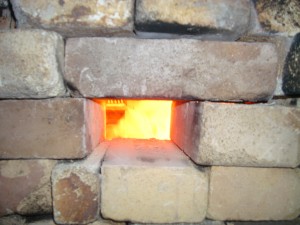 with John Perry and Judi Munn, two of the nicest folks you’d ever want to meet.   John and Judi are the potters at the Ozark Folk Center in Mountain View Arkansas.     My Turnin’ was done in the Hoosier state, but the Burnin’, aahh, the Burnin’, was done down in the Arkansas!  Wood firing, in my humble opinion, is the best way to fire pottery, not only for the beautiful results, but for the intense process.   We fired for about 24 hours, which was actually a good burn and fired to cone 14 in the front by the fire box and cone 12 and 11 in the sections going back towards the flue.  We fired mostly with cypress, which had us thinking that ash might not build like we wanted, but there was nice ash action throughout the kiln, with even my pieces in the back collecting nice ash deposits on the top of the pots. 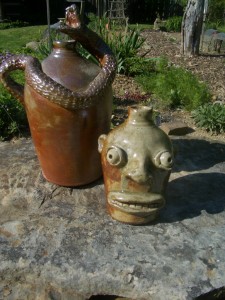 As can be seen in these two folkware pots, the ash build was nice and we got good melt  during the final soaking of the kiln.   Also, this clay had some iron in it which I think adds to the nice flashing color of rust.  There actually is no glaze in those spots; it’s just the interaction of the clay with the fire.

Another way to use the flame and the ash that is flying around the kiln is to glaze the pieces, let the ash settle on the glaze and  let it perform as a flux; this encourages the glaze to ‘move’ and sometimes “run like a bunny” as Judi likes to say. 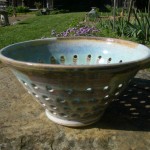 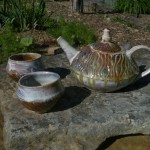 Tea set and colander samples with glazes runnin’ like bunnies!

Below are just a few more images of the kiln, before, during and after shots.  The ‘during’ is definitely the best part.  The team work involved is essential to a good firing; stoking from both sides, raking coals, watching the  cones and draw rings and of course watching the temp rise and fall and controlling the ash and reduction phases.   To sum it up, the Turnin’ is fun, but the Burnin’ is the Best!!!!! 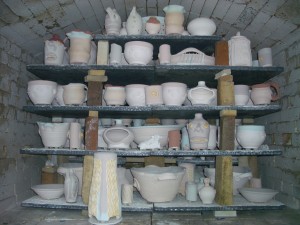 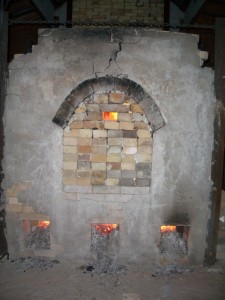 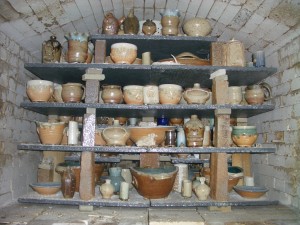